It was mid 2015 when we were told that our home at 438 Queen St was to be developed into an apartment complex ( which will surely be a unique architectural marvel of singular beauty), and so the challenge to find a new space began. Despite mounting pressure from staff to build a hybrid record store / water park / food court inside a giant robot in Myers park, our faithful leaders eventually settled on 369 Queen St, less than 100 metres from the door of our old building, former home of the Salvation Army. 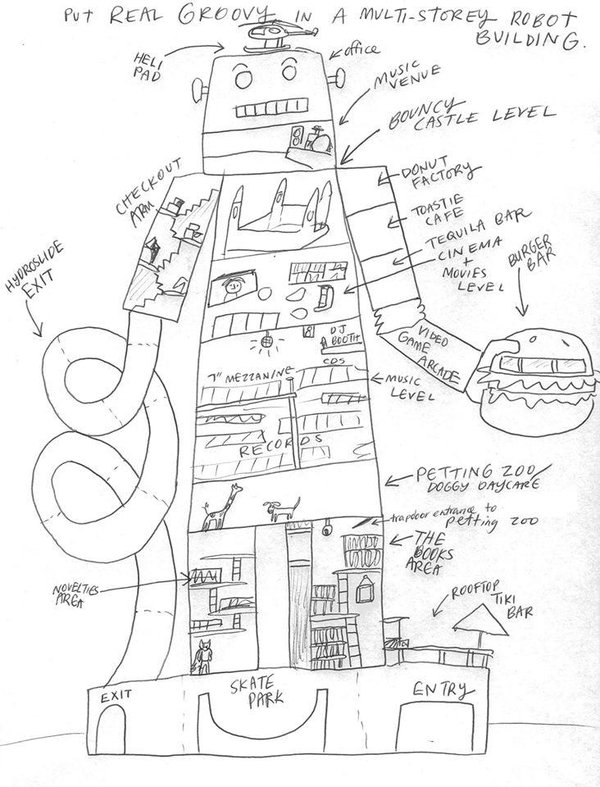 When we first egan fitting the store it was still very much a Church auditorium, having been empty since the Sallies vacated the spot a couple of years prior. In the subsequent time, the sacrosanctity of the place had dispersed enough that our staff (and eventually, customers) could enter the new site without bursting into flames. And so we spent the months leading up to Christmas 2015 smashing, tearing, lifting, sweating, accidentally dropping, swearing, smoothly recovering, building, painting, some gluing, and probably a little too much drinking getting the place ready for January.

January 6th rolled around pretty quickly and after a mammoth effort from our dream-boat staff, as well as several trucks worth of muscular hunks from Crown Relocation (holy shit those guys were so efficient), we managed to get everything across the road in time to open the following day - January 7th. It was a good day (no one required their AK), and those first couple of weeks were amazing - between watching long-time customers exploring the new site and meeting a bunch of new people who came to check out Real Groovy for the first time - we were overwhelmed with the amount of support we received in our new home.

The old shop stayed open for a few weeks as a means to clear out some extra sale stock. We closed the doors for the final time on Friday the 22nd of Jan. We didn’t cry, we just got some dust in our eye. It was dusty okay?


We managed to regain our collective composure in time for the Real Groovy Fete the next morning, a celebration of our new location. There was food! Games! Prizes! A bunch of rad DJ’s! An outside stage with performances from Thomas Oliver, Lydia Cole, Rackets, Paquin and Larzranda! We even had a clown, and HE had balloon animals! It was an awesome time, we had a huge amount of people through the shop that day and it really pushed home what an awesome place we have - the first step towards regaining the cultural landmark status of the old venue.


Denizens of the old store at 438 Queen St will doubtlessly have noticed the step up in terms of aesthetic. We exchanged the multi-coloured, chipped concrete floor for actual carpet, sweet luxurious linoleum and a delightful parquet in the auditorium. The dingy ceiling fans replaced by high ceilings and special, limited edition air-conditioning. We exchanged 25 years of overlapping gig posters (most of which were structural) for a huge window providing views of the lush, green, though still painfully robotless Myers Park.


It would be nice to say we settled in immediately. But, you’ve been to Real Groovy before. You know we didn’t. It was less like beginning a new chapter for the business, more like starting a whole new book. We went through several layout changes to see how the flow of the new shop would work. We extended our vinyl and novelty departments far beyond what the previous location would allow us. We grew our hi-fi and audio accessory area and now have dedicated hi-fi staff. We had a great Record Store Day with performances from Roy Irwin’s Piss, Purple Pilgrims, The Beths, LVJ plus more great DJ’s. We’ve had live in-store performances from country-darling Ryan Bingham (US), the intensely furious King Brothers (Japan), raucous and insane The Wameki (Japan), stoned gingers Bloodnut (NZ), delinquent cuties Powercruise (a youth detention centre near you, presumably), plus heaps more bands, and DJ’s almost every weekend. The staff are getting more vitamin D than ever and now occasionally smile. So many changes in such a short time. It’s been a real adventure and we’re stoked that so many familiar faces and new friends have come along for the ride with us.

Have you checked out the new store yet? No? What are you waiting for? Get down here!