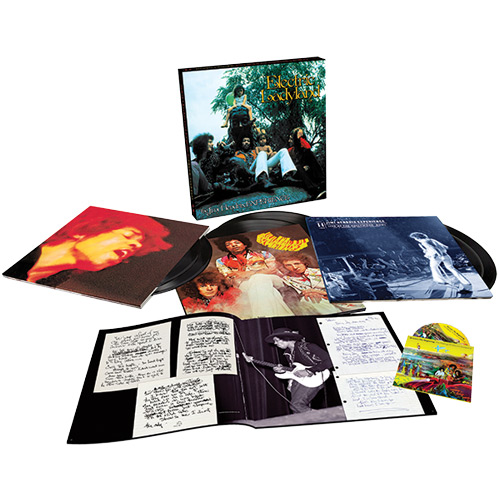 Collect 255pts with this purchase!
Earn Club Points on this item
Afterpay Purchases Excluded
What's this?

Description Item Details
Six vinyl LPs + Blu-ray set. In celebration of the 50th anniversary of the release of the Jimi Hendrix Experience masterpiece Electric Ladyland, Experience Hendrix and Legacy Recordings present a special Deluxe Edition box set. The set includes: LPs One and Two: the original album, now newly remastered by Bernie Grundman from the original analog tapes. LPs Three and Four: Electric Ladyland: The Early Takes, which presents 20 never before heard demos and studio outtakes from this period in Hendrix’s career. LPs Five and Six: Jimi Hendrix Experience: Live At the Hollywood Bowl 9/14/68, part of Experience Hendrix’s Dagger Records official bootleg series. Blu-Ray: Blu-Ray: includes the acclaimed full-length documentary At Last… The Beginning: The Making of Electric Ladylandplus a new 5.1 surround sound mix of the entire original album by Hendrix’s original engineer Eddie Kramer plus the original stereo mixes in uncompressed 24 bit/96 kz high resolution audio. Electric Ladyland Deluxe Edition includes a full color, 48-page book containing Jimi’s handwritten lyrics, poem and instructions to his record label, as well as never before published photos from the recording sessions that were shot by Eddie Kramer himself. All contained in a casemade book with new cover art which is true to Hendrix’s original vision of the album’s cover: a Linda (McCartney) Eastman photograph of the band and children at the statue of Alice In Wonderland in New York’s Central Park.