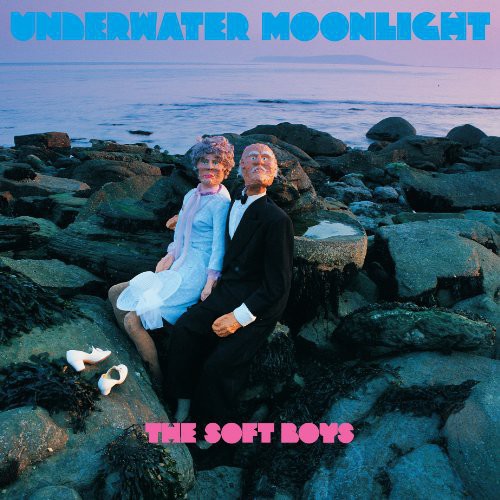 Collect 40pts with this purchase!
Earn Club Points on this item
Afterpay Purchases Excluded
What's this?

After recording the material that would later comprise the bulk of Invisible Hits, the Soft Boys recorded their masterpiece, the shimmering neo-psychedelic Underwater Moonlight. Essentially, the band didn't change their style for the record -- they merely perfected it. The Soft Boys don't hide their influences -- whether its the ringing guitars of the Beatles and Byrds or the surreal humor of John Lennon and Syd Barrett -- but they assimilate them, resulting in a fresh, edgy take on '60s guitar pop. Robyn Hitchcock's subject matter tends to be more explicitly weird and absurdist than his influences, as titles like "I Wanna Destroy You," "Old Pervert," and "Queen of Eyes" indicate -- even "Kingdom of Love" equates romance to bugs crawling under your skin. But the lyrics aren't the only thing that are edgy -- the music is too. The Soft Boys play pop hooks as if they were punk rock. "I Wanna Destroy You" isn't overtly threatening like their post-punk contemporaries, but with its layered guitar hooks and dissonant harmonies, it is equally menacing. Furthermore, the group can twist its songs inside out and then revert them to their original form, as evidenced by "Insanely Jealous." Although the neo-psychedelic flourishes are fascinating, the key to record's success is how each song is constructed around rock-solid hooks and melodies that instantly work their way into the subconscious. In fact, that's the most notable thing about Underwater Moonlight -- it updates jangling, melodic guitar pop for the post-punk world, which made it a touchstone for much of the underground pop of the mid-'80s, particularly R.E.M.