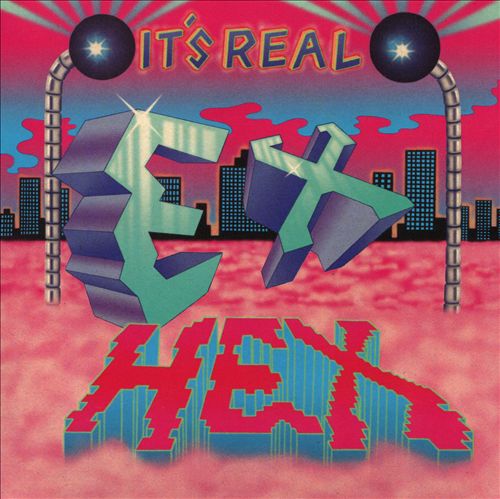 On Rips, Ex Hex reimagined the instant gratification of rock & roll with thrilling results. On their second album, Mary Timony, Betsy Wright, and Laura Harris take a deeper dive into rock's transporting powers. At once tighter and more complex than Rips, It's Real reflects the two years Ex Hex spent touring in support of their debut, as well as the year it took to craft the album in the studio (one key piece of gear was the Rockman, an amp that Boston's Tom Scholz developed in 1982). In much the same way that some power pop and new wave bands expanded their music to arena-sized proportions as the '80s unfolded, It's Real is bigger and more deliberate than its predecessor. The songs are longer, the beats are heavier, and the guitar solos are more ambitious, with the suite-like "If You Want It to Be True" providing one of many showcases for Timony's formidable fretwork. While "Diamond Drive" proves once again that Ex Hex can tap into the pure joys of rock like few other bands can, much of It's Real finds them exploring more complicated territory. The band uses the album's shiny, hard-edged sound to create a world of rock & roll magic that, in its own way, feels akin to the mystical imagery of Helium and Timony's solo work. Sometimes, the illusions of It's Real separate lovers: On "Good Times," Timony is abandoned and surrounded by rainbows, while the mention of "rock 'n' roll hair" suggests that this is what might have happened after the Cars let the good times roll. Later, on "Another Dimension," Wright (who contributes several of the album's highlights) wishes she could bend the fabric of space and time to find someone who's long gone -- or possibly imaginary. Elsewhere, music is a vehicle for connection and reconnection, whether it's riding radio waves on "Radiate" or coming out of hiding to dance on "Cosmic Cave." As Timony sings on the excellent power ballad "No Reflection," "It's one thing to be real/and another to pretend." Thanks to Ex Hex's sheer commitment to their rock & roll fantasies, It's Real never feels less than genuine.