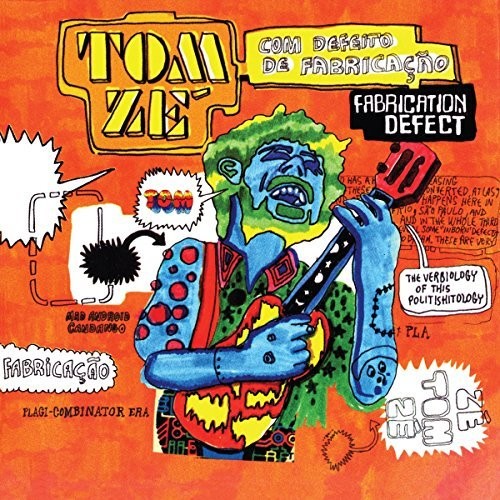 Collect 51pts with this purchase!
Earn Club Points on this item
Afterpay Purchases Excluded
What's this?

Description Item Details
This is among our favorite Tom Ze albums. Richard Gehr who writes so much better then we had this to say about Tom: You don't need to be a polymath to love Tom Zé's's music, but it helps. A seminal figure of the early-'70s Tropicalismo movement in Brazil that launched the careers of Caetano Veloso, Gilberto Gil and Os Mutantes, among others, Zé's is a card-carrying cultural cannibal inspired equally by both ideas and sounds. "I don't make art," he has said. "I make spoken or sung journalism." By way of explaining his unique outsider status in Brazilian popular music for National Public Radio, Zé recalled how he "discovered at a young age that I was horrible composer, a horrible instrumentalist, and a horrible singer." Like Lee Perry, George Clinton, Kip Hanrahan and Hal Willner, Zé is a genre unto himself, an uncompromising ringmaster with a talent for marshaling mighty forces to manifest his idiosyncratic musical visions. Born Antonio José Santana Martins in the outback village of Irara, Bahia, in 1936, Tom Zé was a semipopular singer-songwriter from his eponymous debut album in 1968 through the '70s. By the end of the '80s, however, a discouraged Zé was on the verge of abandoning music completely. In fact, he was on the verge of assuming management of a gas station with his wife when he learned that David Byrne wanted to meet him. Drawn to it's barbed-wire cover illustration, Byrne had picked up a copy of Zé's 1975 album Estudando o Samba (Studying Samba) while visiting Brazil, and wanted to meet it's maker. The following Luaka Bop releases of Tom's music revitalized his career, nowhere more so then in Brazil. Tom's third Luaka Bop album, Com Defeito de Fabricao (Fabrication Defect), is Zé's most fully realized so far. It consists of fourteen "defects," tracks Zé's composed through his "esthetics of plagiarism," or arrasto, which he defined as "'wilding' with a purpose, i.e. robbery." Zé's denounces cynical first-world purveyors of commercialized crap to the third-world masses while celebrating said masses' supposed imperfections: religious hypocrisy, curiosity, stupidity, raging youthful hormones and a love of dance. One perfect moment: in "Juventude Javali," a chorus sings of how "the wine of open legs/ Soaks the offerings on the altar" in a harmony so lovely and effortless you could cry. And it's hard to believe the Nortec Collective has never enjoyed the consummate Northeast accordion techno of Fabrication's "Xiquexique," whose lyrics contains a nod to the late, great Pernambuco star Chico Science. In it's overwhelming beauty, willful ignorance, and bottomless wealth of ideas and pleasures, Ze's music reminds me of a photograph someone recently sent me of Marilyn Monroe perusing the final page of James Joyce's Ulysses, the perfect monument to fatal condescension.