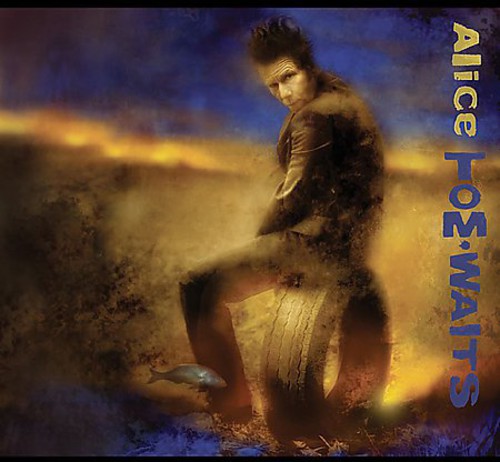 It's been long time since Tom Waits recorded an album as saturated with tenderness as this one. The carny-barker noise merchant who has immersed himself in brokenness and reportage from life's seamy, even hideous underbelly for decades has created, along with songwriting and life partner Kathleen Brennan, a love song cycle so moving and poetic that it's almost unbearable to take in one sitting. Alice is alleged to be the "great lost Waits masterpiece." Waits and Brennan collaborated with Robert Wilson on a stage production loosely based on Alice Liddell, the young girl who was the obsession and muse of Lewis Carroll's Alice in Wonderland books. The show ran in Europe for a time and the production's 15 songs were left unrecorded until now. Alice forgoes the usual nightmare lyric sequences, warped, circus-like melodies, and sonic darknesses that have been part and parcel of Waits' work since Swordfishtrombones. Instead, this song cycle is, for the most part, steeped in jazz ballads, old waltzes, European folk songs, theatrical love paeans, and music not so easily identified. The instrumentation is different, with the utilization of a small chamber orchestra (the violins are Stroh violins, instruments outfitted with a metal horn on the end for amplification purposes), marimbas, piano, organ, woodwinds, and reeds, and the complete absence of guitars. The set opens with the title track, a smoky jazz ballad that may echo Waits' work from the 1970s, but is actually miles beyond it in scope. Here there is no purposely postured nuance or affectation of persona. The lyric is plaintive and full of pathos; it's almost a suicide note set to the most romantic melodic invention lounge jazz is capable of. As Waits sings, "The only strings that hold me here/Are tangled up around the pier/And so a secret kiss/Brings madness with the bliss/And I will think of this/When I'm dead and in my grave/Set me adrift/I'm lost over there/But I must be insane/To go on skating on your name/And by tracing it twice I fell through the ice/Of Alice/There's only Alice," the world turns inside out and the listener can no longer decide if this is a man or a ghost reporting from beneath the pond's surface. If love brings this, if obsession has such a cost, how can they be steeped in tenderness this transparent and plain? Elsewhere, Waits manages to delve into the voice of the turned-out lover, the rejected stone, the lost madman, as he does on "We're All Mad Here" and "Everything You Can Think." But even here there is a reflective dimension, nearly childlike in their simple embrace of loss, dispossession, and descent into the maelstrom of the human soul. Ghosts whisper in the mix, spirits float through the air, and demons passionately possess the protagonists. In the simpler, melting melodies of "Lost in the Harbour," "No One Knows I'm Gone," and the haunting tango at the heart of "Watch Her Disappear," obsession with the unmentionable (let alone the unattainable) is offered as an empathy for powerlessness, buoyed up by an instrumental crutch, arranged to give a voice to those who dare not speak publicly. The melodies on Alice are easily the most direct Waits has written since Blue Valentine, but are more elegant than even those found on Foreign Affairs or Black Rider. Alice is no step back, but a further step toward oblivion -- the place where the sound of desolation, the melody of loneliness, and the confused darkness at the root of the human heart come together and speak as one in a nursery rhyme for adults.