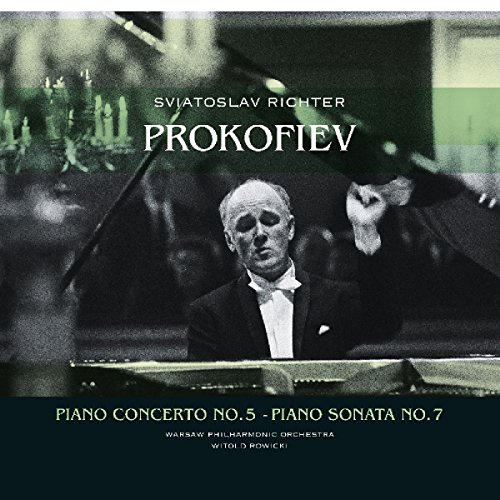 Collect 49pts with this purchase!
Earn Club Points on this item
Afterpay Purchases Excluded
What's this?

Sergei Prokofiev's Piano Sonata No. 7 in B♭ major, Op. 83 (1942) (occasionally called the "Stalingrad") is a sonata composed for solo piano, the second of the three "War Sonatas". The sonata was first performed on 18 January 1943 in Moscow by Sviatoslav Richter.

On 20 June 1939 Prokofiev's close friend and professional associate, the director Vsevolod Meyerhold, was arrested by the NKVD just before he was due to rehearse Prokofiev's new opera Semyon Kotko; he was shot on 2 February 1940. Although his death was not publicly acknowledged, let alone widely known about until after Stalin's reign, the brutal murder of Meyerhold's wife, Zinaida Raikh, less than a month after his arrest was a notorious event. Only months afterwards, Prokofiev was 'invited' to compose Zdravitsa (literally translated 'Cheers!', but more often given the English title Hail to Stalin) (Op. 85) to celebrate Joseph Stalin's 60th birthday.

Later that year, Prokofiev started composing his Piano Sonatas Nos 6, 7, and 8, Opp. 82–84, widely known today as the "War Sonatas." These sonatas contain some of Prokofiev's most dissonant music for the piano. Biographer Daniel Jaffé has argued that Prokofiev, "having forced himself to compose a cheerful evocation of the nirvana Stalin wanted everyone to believe he had created" (i.e. in Zdravitsa) then subsequently, in these three sonatas, "expressed his true feelings". It was therefore ironic (most especially given the musical allusion identified by Jaffé in the central movement: see below) that Sonata No. 7 received a Stalin Prize (Second Class).