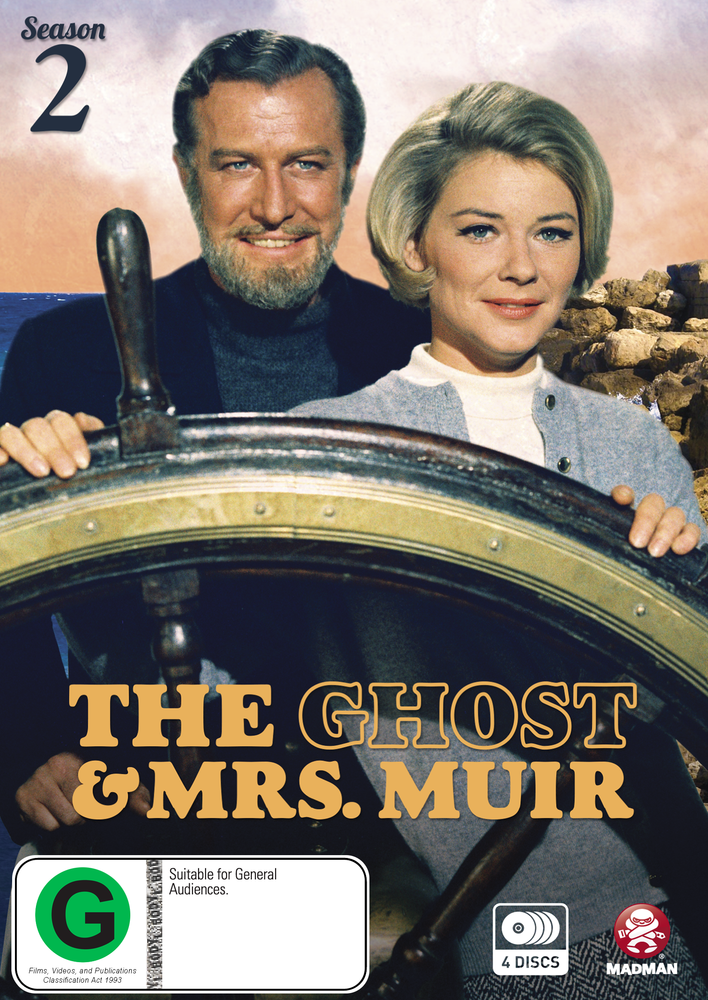 Product Unavailable
Description Item Details
When widow Carolyn Muir moves her two children to Gull Cottage in the charming seaside town of Schooner Bay, she didnÂ’t expect her newly rented home to be owner-occupied Â– especially by a ghost whose bad moods can affect the weather. The irascible, spectre is Captain Gregg Â– an old seadog who has little time, nor tolerance for others invading his abode. He quickly demands the justifiably shocked Mrs. Muir pack her bags and disembark with her crew in tow. Most people would run screaming, but Captain Gregg has met his match in the equally stubborn Carolyn Muir, a quality he soon comes to admire, who refuses to leave. Eventually he begins to soften; the two declare a truce, and the Captain begins to develop a ghostly affection for the lovely Mrs. Muir. Based on the classic 1947 film, The Ghost & Mrs. Muir television series became a warm favourite with viewers thanks to its charming balance of magical comedy (along the lines of Bewitched and I Dream Of Jeannie), and the impossible romance between the Captain and Mrs. Muir. Available for the first time ever, this 4 disc set brings together all 24 memorable episodes from the second and final season starring Hope Lange, Edward Mulhare, Reta Shaw and Charles Nelson Reilly. EPISODES 1. GREAT POWER FAILURE: The captain temporarily loses his supernatural powers. 2. CENTENNIAL: Claymore enters the town centennial seamen's games. 3. THERE'S A SEAL IN MY BATHTUB: A runaway seal takes refuge with the Muirs. 4. DOUBLE TROUBLE: Mrs. Muir's Irish suitor is Capt. Gregg's double. 5. TODAY I AM A GHOST: An inept ghost requires the captain's help. 6. MADAM CANDIDATE: Carolyn runs against Claymore for city council. 7. NOT SO DESPERATE HOURS: Three thugs invade Gull Cottage. 8. MEDIUM WELL DONE: The captain matches powers with a fraudulent medium. 9. SURPRISE PARTY: The family surprises the captain with a birthday party. 10. THE FIREHOUSE FIVE PLUS GHOST: A beloved fire engine must be retired. 11. SPIRIT OF THE LAW: Carolyn's protest lands her in jail. 12. PUPPY LOVE: Candy falls for a new boy at school. 13. HOST TO THE GHOST: Carolyn modernizes the kitchen. 14. THE GHOST OF CHRISTMAS PAST: The captain gives the family an unusual Christmas present. 15. LADIES MAN: Carolyn and the captain help Claymore gain confidence around women. 16. NOT SO FAUST: The captain creates an encounter between Claymore and the devil's emissary. 17. TOURIST, GO HOME: Carolyn joins the Schooner Bay restoration project. 18. NO HITS, NO RUNS, NO OYSTERS: Jonathan displays a talent for baseball. 19. DIG FOR THE TRUTH: The captain wants to correct a historical inaccuracy. 20. PARDON MY GHOST: Claymore donates the captain's things to charity. 21. MARTHA MEETS THE CAPTAIN: An emergency forces the captain to reveal himself to Martha. 22. AMATEUR NIGHT: The town gives an amateur-night benefit for homeless seamen. 23. CURIOUS COUSIN: Carolyn's snoopy cousin (Alice Ghostley) visits. 24. WEDDING DAY?????: Carolyn's parents arrive hoping to meet her captain.