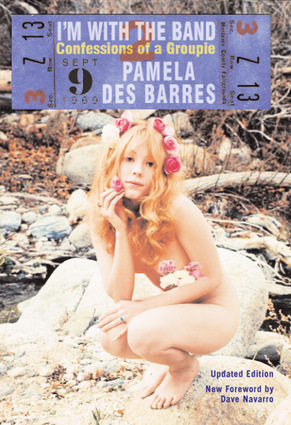 Im With The Band

The stylish, exuberant, and remarkably sweet confession of one of the most famous groupies of the 1960s and 70s is back in print in this new edition that includes an afterword on the author's last 15 years of adventures. As soon as she graduated from high school, Pamela Des Barres headed for the Sunset Strip, where she knocked on rock stars' backstage doors and immersed herself in the drugs, danger, and ecstasy of the freewheeling 1960s. Over the next 10 years she had affairs with Mick Jagger, Jimmy Page, Keith Moon, Waylon Jennings, Chris Hillman, Noel Redding, and Jim Morrison, among others. She traveled with Led Zeppelin; lived in sin with Don Johnson; turned down a date with Elvis Presley; and was close friends with Robert Plant, Gram Parsons, Ray Davies, and Frank Zappa. As a member of the GTO's, a girl group masterminded by Frank Zappa, she was in the thick of the most revolutionary renaissance in the history of modern popular music. Warm, witty, and sexy, this kiss-and-tell–all stands out as the perfect chronicle of one of rock 'n' roll's most thrilling eras.