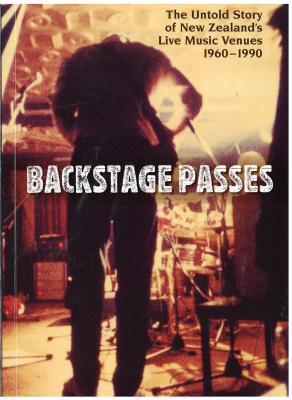 Collect 40pts with this purchase!
Earn Club Points on this item
Afterpay Purchases Excluded
What's this?

Description Item Details
New Zealand music was made on beer-stained stages, in grimy toilets and smoky back rooms. Backstage Passes charts the stories of the countries most celebrated live music venues. Hookers, heroin, cocaine, killings, sex in alleyways, punch-ups on dance floors - live music was the nexus around which a cultural history happened.
Backstage Passes has the inside story on what it was like to be part of a vibrant scene when New Zealand was a rural backwater. First-hand accounts from muscicians, fans and bar owners bring each chapter to life.
The beating heart of the book is the music and the spaces within which the music was played. Rock, pop, reggae, punk and hip-hop, every genre has its heroes and villians, it's successes and casualties. Backstage Passes is a tribute to all the characters whom sizzled up the stage, worked the doors, poured the beers and danced to the beat.